Day through Tuscany into Florence

In Sienna I loved the Dumo. It is beautful just like the Dumo in florence, Breath taking. 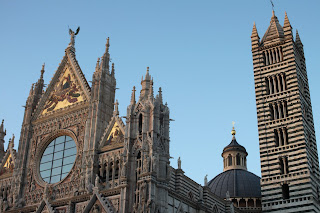 That morning we packed  up and hit a large market hoping to score some deals. But this market turned out to be more for the locals and didn't have the deals on trinkets and Italy stuff we were looking to buy. But Maria remembered a pair of boots she had seen the night before and the stores were just opening so Maria has some new boots to kick around. We rushed back to our hotel to check out and it was back into the car and on to San Gamiano, with a couple of small stops on the way. 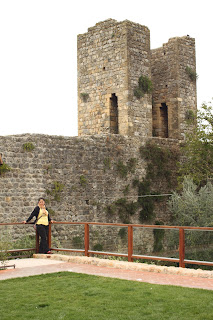 Our First stop was Monteriggioni, a Midevel town. It  had olive trees linning the outside walls and the walls surrounded the entire small town. It was a very small town but it gives the feel of how it would have been to walk around in the midievel times.

After this quick stop we continued on to the Manhatten of Tuscany, San Gimignano. This town is known for it's tall towers as the towns people would try to out do eachother and build the tallest tower in town. I think there is only 12 towers left but at it's peak this town had 70+ towers and the people could walk from tower to tower without going down to street level. 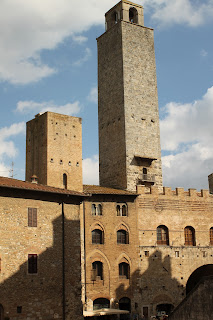 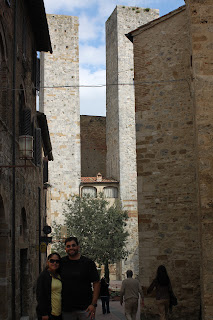 We got to town just in time to eat before the 2 hour lunch break where most of the shops and some restaurants close. This was probably our best meal of the trip so far and I will have to come back and post up the name. After lunch we walked the streets and hiked up to the top of town with incredible almost 360 degree views of the rolling Tuscan hills. 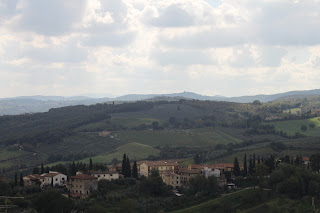 At this point getting into the car we toyed with the idea of driving out to Pisa before going into Florence. But we decided due to the time and the hassel of turning in the car we did not need to add this stress so it was onto Florence via the back roads thanks to our GPS we got for free for taking a dirty rental car. We dropped the car off on the out skirts of town and gathered all of our luggage and now wine bottles and hopped on a city bus to the center of town where our Bed & Breakfast was. 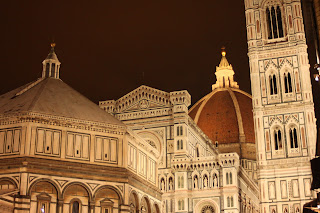 Another killer location for our room in Florence just half a block from this, the Duomo and that write up to come during our train ride to Venice tomorrow, so check back again!
Posted by M-M Travel at 5:27 AM